The results: The Finals weekend of the World Indoor Bowls Championships 2019

Three weeks of exciting competition boiled down to this – the Finals of the Just World Indoor Bowls Championships 2019. Discover all the excitement, and who took away the Championship title, below.

The first match of the day was a Singles quarter final between defending World Indoor Singles Champion, Mark Dawes, up against a former World Indoor Singles Champion, Stewart Anderson. The first set was a world-class demonstration of bowls. The packed audience were treated to a show of inch perfect draw bowls and strategic play not yet seen in the event thus far. End nine and Anderson found himself three down with only his last bowl left to play. His shot was millimetre perfect and gently tucked into the jack – the set to Anderson. In the second set both players were not as sharp as before, particularly Dawes. By the seventh end he had managed to get the score to 6,7 down, but Anderson was in top form in the last two ends. The match ended 6,11 and Anderson won his place in the semi finals.

The next match of the day saw Greg Harlow up against Nick Brett, both fighting for their place in the semi finals for the World Indoor Open Singles. Brett was on top form, and by end four he was in the lead 4,2. Harlow did what he could to even the scores but whatever he did, Brett seemed to have an answer. It was Brett that took the next three ends with devastating bowls to take the set 9,3. The second set was much of the same. Brett won the final set 9,1 and earned his place in the semi finals.

Next up was Les Gillett against Scott Edwards. Gillett stormed into the first set, overwhelming the bowls of Edwards in the first four ends to take a 7,0 lead. Edwards did not give in and played a great bowl to take a double away from Gillett in end five. However the last ends did not go his way, as Gillett took three hard-earned singles to clinch the first set 10,2. In the second set Edwards upped his game and had a five shot lead by end three. However Gillett responded well, taking seven shots in the next three ends. Following some evenly matched ends, Gillett played a great final end leaving Edwards without the shot he needed to force a tie break. The second set and match went to Gillett, who won his place in the semi finals.

The last quarter final of the day saw Simon Skelton up against former World Indoor Champion Darren Burnett. The first set was very low scoring, with both players achieving mostly counts of singles. The first set ended with a draw at 6,6. In the second set it was Skelton that got it together a little better than Burnett. Six ends in and it was 5,1 to Skelton. Burnett then took ends seven and eight with two doubles to level the set at 5,5. In the final end, with everything to play for, Skelton put his first bowl right on the jack. Burnett fired and managed to remove it but Skelton placed in another shot bowl and Burnett could not save this one. The set ended 6,5 to Skelton, and his won the match and his place in the semi finals.

The first semi final in the World Indoor Open Singles saw former World Indoor Champion, Stewart Anderson up against Les ‘Razor’ Gillett. It was Gillett that got off to a good start, taking two hard earned singles from Anderson in succession. But then it was Anderson who took full advantage of some loose bowls in the next two ends to go 5,2 in the lead. Following some evenly matched playing, at end eight it was Gillett that managed to grab a single to be one shot behind at 7,6. In the final end Anderson drew a perfect shot to take a single and the set 8,6. In set two Anderson was the steadier of the two players and end by end he drew away from Gillett. By the close of the fifth end the score was 6,1 to Anderson. Although Gillett never gave up, and his persistence paid off in ends six and seven as he collected five shots to draw level at 6,6. In an exciting ninth end Gillett had to achieve an impossible draw shot to try to move Anderson’s bowl. But it was not to be, and it was Anderson that earned his place in the final.

The next match was the first of the Under 25’s semi finals. Ireland’s Chloe Watson, Defending Champion, was up against qualifier Jordan Philpott. Philpott had also earlier been awarded the WBT Young Player of the year award. Philpott got off to a cracking start in the first two ends, but Watson managed to hold him off for a single in end three and again in end five with a double. Philpott however had found his weight on the rink and was playing well consistently enough to take two doubles on the next two ends and first set 3,13. In the second set it was once again Philpott that got to grips with both line and weight a tad better than Watson and he was consistently just able to get the better bowl into the head. It was Philpott that finished the match with a great double to take the second set and match for a place in that evenings Under 25 final.

The second World Indoor Open Singles semi final saw former World Indoor Champion, Nick Brett facing ex top 16 player, Simon Skelton. First set and it was Brett that got away from the blocks almost straight away, taking the first four ends to get a 6,0 lead. Skelton kept coming at him but it was not enough and Brett took the first set 2,9. In the second set Skelton’s accuracy was improving. By end three it did look as if Brett was so outstanding that Skelton just could not find any replies. By end five Brett was 1,7 in front, but then something incredible happened. Skelton pulled off two singles in ends six and seven, end eight was a count of three as Brett’s bowls just missed, and the final end saw Skelton taking an incredible single to win the set 8,7. The match was about to go to a tie break. Brett took the first end in fine style but it was Skelton that dug really deep and managed to get the second end. After an hour and a half the match was back to where we started, all square with just one end to go. In a tense play Brett’s final bowl just missed and Skelton had his place in the final.

The day ended with the second semi final in the Under 25 World Indoor Singles. Dean Drummond from New Zealand was up against John Orr, who qualified from Scotland. It was Orr that settled in very quickly onto the portable rink. Drummond clearly needed time to get to grips with it and Orr took full advantage, taking the first set 2,11. In the second set Drummond’s attempts to stop Orr were in vain. Orr was playing superb inch perfect bowls and he came quickly away with the second set to take the match 2,11 – 5,9

The final match of the day was the Under 25’s Final between two of the Professional Bowls Associations players who had battled their way through tough qualifiers to get here. From Lincolnshire came Jordan Philpott, and he was up against Scotland’s John Orr, Scottish Junior International. It was Orr that got off to a flying start with some great bowls against an equally determined Philpott. Philpott held him off as well as he could, but it was Orr who took the first set 5,10. In the second set it was Philpott that started well, but Orr played great precision bowls and took the next four ends in style to take a 3,6 lead. Both scored one each in ends eight and nine, and a determined Philpott took two shots off Orr in the tenth end to bring the score to 6,7 – just one behind. In the last end Orr once again stole it away from Philpott. John Orr is our Under 25 World Indoor Champion 2019.

This final was between qualifier and ex top 16 player from Lincoln, Simon Skelton and former World Indoor Champion from Scotland, Stewart Anderson. It had all the makings of a great match. The International Arena at Potters Resort was jam packed with not a single seat to spare. The match itself was packed end to end with millimetre precision drawing, timed bowls to perfection and sheer accuracy of driving bowls from both players – it was electric in the audience. Both players were physically and mentally exhausted when they stepped off the rink at the end of the match.

It was Anderson that started the set well going 7,3 up by end six with incredible bowls, Skelton was good but could not stop the relentless force of Anderson. No matter what Skelton put down on the rink it was Anderson that simply took it all apart with incredible bowls and the set eventually finished 11,5. In the second set the two players were at it again, neither player giving in, End five it was 4,4. End nine it was 6,6. It was a superhuman effort from Skelton that saw him take two single to clinch the set at 6,8. In the tie break both players were producing bowls that were just out of this world. Anderson took both ends with outstanding bowls to take the match and become the ‘Just’ 2019 World Indoor Open Singles Title. Congratulations! 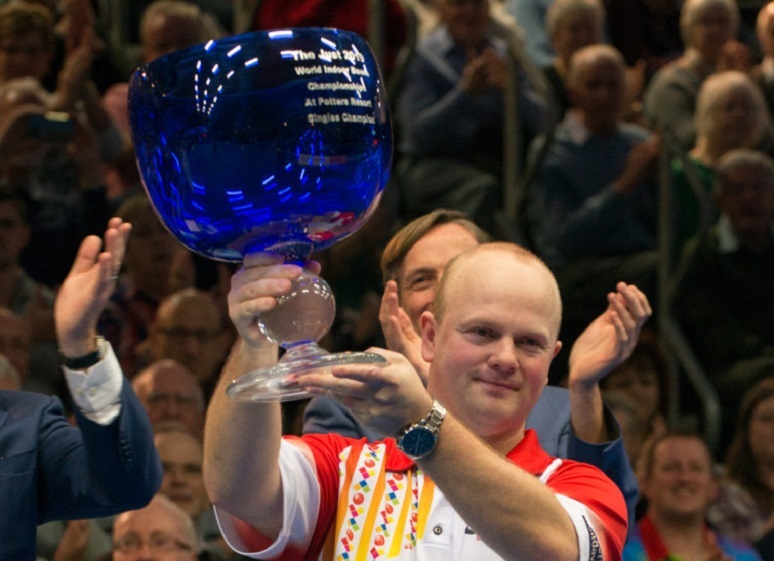