Meet the players: An interview with Darren Burnett

Darren Burnett is currently ranked 5th in the world in Indoor Bowls.

We caught up with Darren to find out how bowls became a part of his life, what he’s doing to prepare for the Championship and more.

1. How did you first get into playing bowls and how long have you been playing for?

I was introduced to bowls by my Parents, Margaret and Willie. I used to go up and watch, and started to play myself from around eight years old. My late Dad represented Scotland in the early 1980s which was always my ambition. My younger brother, Ryan took up the sport a lot later but he is currently out bowling in Australia representing the Broadbeach Club.

2. How does it feel to be at the level you are, and how hard have you had to work to reach that level?

Competing as an individual at world level is a great feeling and it’s always challenging to compete against the best players in the world to test yourself. Obviously being selected in team events all over the world representing Scotland is a great feeling and one you should always appreciate and not take for granted as representing your country really is the biggest honour. Reaching this level takes a great deal of practise, drills and a lot of family sacrifices.

3. Many say that bowls is a sport for all. Would you encourage people to have a go at playing bowls?

I would always encourage people to try our great sport. Like most sports shown on TV, many watchers may not appreciate the physical and mental skills required at the highest level. Bowls is a great social sport and keeps your body and brain physically active. The ability for someone in their teens to compete against someone in their 70’s and for us not to be able to predict the outcome is something that not all sports have.

4. Do you prefer playing indoor or lawn bowls?

That is a difficult question. When I first started to win major events I probably had more success indoors, however over the past 10 years I have won medals at both World and Commonwealth outdoor levels. I find both formats of our game to be so different and I can understand some bowlers playing one and not the other, however I find them both to deliver different challenges which I like to take on board.

5. How many bowls do you have and what brand are they?

My wife, Linsey, would say too many! I am lucky to be a sponsored player with the Taylor Bowls family. I have been lucky to have their support during my most successful years. I usually use the Taylor Ace model in both formats in the U.K, using a size 4 indoor but often a size 3 outdoors. I have also used the Blaze and International models which are equally effective in different conditions.

6. Are you excited to be competing in the Just 2019 World Indoor Bowls Championships?

The World Indoor Championships getting closer usually means a couple of things to me. As it’s held early in January it usually means it’s time for me to get a move on with Christmas preparations and time to get on the practice rink to try and get my game as sharp as can be. This event is always very special and is the pinnacle indoor event in our sport. We are lucky to have Just sponsoring and Potters Leisure Resort hosting this event.

7. Are there any other competitors you’re excited to see play? Or any matches you’re particularly excited about?

I always like to watch the matches in the event and occasionally commentate on some of them. There are so many top players it wouldn’t be correct to single any out. However it’s always nice to see those players making their debut at this great venue, which really is the home of bowls.

8. How have you been preparing for the competition?

I’m not doing too much different at the moment as I like to spend the festive time with my wife, Linsey and my two girls, Isla (9) and Evie (7). However, after Christmas I will be up getting as much rink and practise time as I can just to work on some shot selections and try to build up the confidence in my game.

9. What do you enjoy the most about competing at the World Indoor Bowls Championships?

I think the unique thing about the World Indoor Championships for me is that you’re not only bowling in front of an audience, you also meet these people around the resort in-between matches, at the restaurant and in some of the bars and social areas.

I never make predictions but always look to three steps at most events. The first step is always the first round as they have become so difficult over the years. Step two is always the quarter finals. A difficult day where all four quarter finals are played off. The last step is the trophy and title, because when you get to the last four of any event, it really is anybody’s. 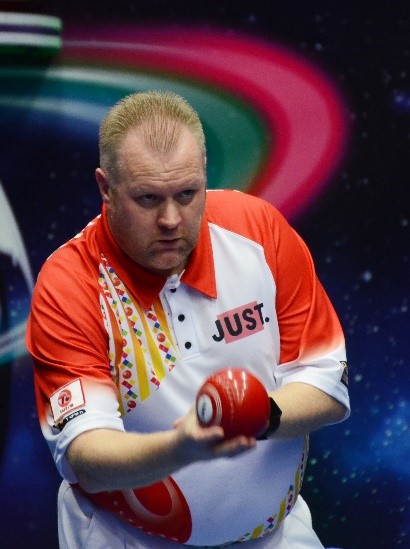